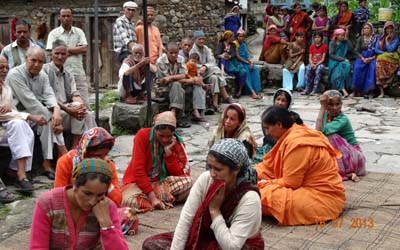 Over 250 children in the state were orphaned during the deluge that followed the cloudburst in the Kedar valley. The disaster-affected children aged 5 to 15 congregate for prayers, at the end of a school day, in the hall of the Vatsalvya Seva Kendra in Guptkashi. This is followed by supper.The children were kept engaged through yoga, pranayama and meditation sessions to soothe their frayed nerve.
Initially, the organization had come to Rudraprayag to help in the rescue and relief work. On visiting the place, seeing the disaster-stricken victims, we decided to start the center and rented the current premises. Now, these children are our responsibility and we ensure they complete their education and get jobs.
Interestingly, 10 college-going girls, who had given up their education after the tragedy, have volunteered to look after these children and in turn, we are taking care of their education.
One of the Volunteers, Vandana Vajpayee said, “I had left my MBA mid-way after the disaster as my father lost his job. I joined the ashram 8 months ago. Now not only have I resumed my studies but also fought college union election, and become its general secretary. The satisfaction of bringing up these children has given me immense pleasure.”
Our main aim was to rebuild the lives of the children orphaned in the Kedarnath tragedy so that they are not defined by the disaster.